Ozone layer depletion is one of the most serious environmental problems in today’s world. Ozone layer absorbs about 97-99% of the harmful ultraviolet (UV) radiation from the Sun and is vital for existence of life on Earth. Depletion of this layer will leave planet Earth defenseless against the harmful effects of UV radiation. In this general knowledge article, we will discuss about the basics of ozone and ozone layer depletion.

In the upper atmosphere, ozone is formed naturally by chemical reactions involving solar ultraviolet radiation (sunlight) and oxygen molecules. It protects earth from incoming UV radiation from Sun. In the lower atmosphere near the Earth’s surface (the troposphere), ozone is formed as a result of reactions between sunlight and air pollutants, mainly nitrogen oxides (from vehicle exhaust, combustion processes etc) and volatile organic compounds (VOC) such as petroleum products. At ground level, high concentrations of this ‘bad ozone’ is toxic to both plants and animals. 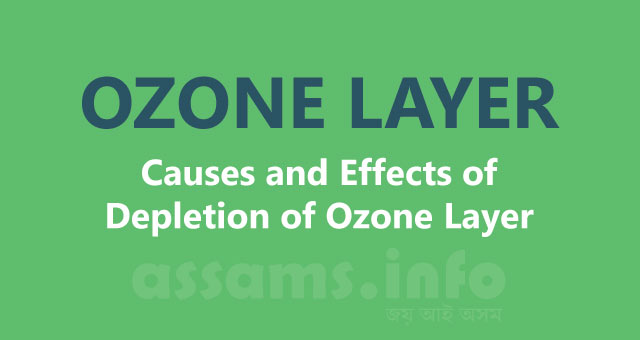 What is Ozone Layer?

Ozone layer is a layer in upper atmosphere where ozone is found in highest concentrations. Also known as Ozonosphere, it forms a thick layer in stratosphere. The ozonosphere is located at altitudes of 15-35 km (9 to 22 miles) above the surface of the earth. The average concentration of ozone is around 0.6 PPM (parts per million). The highest concentrations of ozone occur at altitudes from 26 to 28 km (16 to 17 miles) in the tropics and from 12 to 20 km (7 to 12 miles) towards the poles. The ozone layer was discovered in 1913 by the French physicists Charles Fabry and Henri Buisson. The thickness of the ozone layer changes by season and location.

Why Ozone Layer is Necessary?

Ozone layer is important because it absorbs harmful ultraviolet radiation from the Sun, which is highly energetic and damages both plants and animals exposed to it. In atmosphere UV radiations with higher wavelengths are absorbed by diatomic oxygen. But radiation between 240 – 290 nm are not absorbed by the diatomic oxygen molecules. Those wavelengths are absorbed by ozone. Absorption of UV radiations by the ozone layer is important for life to flourish on planet Earth.

Ozone Layer Depletion is the process in which the ozone layer becomes thinner due to the destruction of ozone by several man-made substances in the atmosphere. Ozone depletion occurs when destruction of the stratospheric ozone is more than the production of the molecule. During the last several decades, human activities have resulted in considerable reduction in the ozone layer of the atmosphere. Scientists have observed reduction in stratospheric ozone since early 1970s. In some areas the depletion process is so worse that a hole appears in the ozone layer. Technically, ozone hole is not a ‘hole’, but a region of exceptionally depleted ozone in the stratosphere. Usually ozone holes form over the Poles during the onset of spring seasons. One of the largest such hole appears annually over Antarctica between September and November. 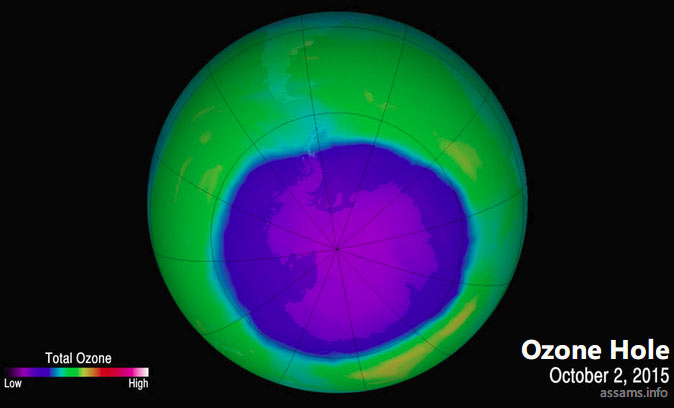 Some of the directs effects of ozone layer depletion are outlined below: