Bharat Ratna is the highest civilian award conferred by the Government of India. It is awarded in recognition of exceptional service or performance of the highest order in any field. Bharat Ratna was instituted in the year 1954 and the first recipients were C. Rajagopalachari, Sarvepalli Radhakrishnan and C. V. Raman. Since then, many dignitaries from different fields has received this coveted award. It is not mandatory to award the Bharat Ratna every year. Also, the number of awards is restricted to a maximum of three in a single year. It may also be awarded posthumously. 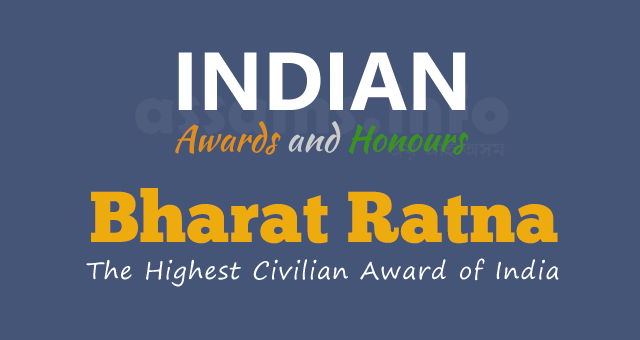 Frequency: No fixed frequency or it is not mandatory to confer annually.

Eligibility: Earlier the eligibility criteria was “Exceptional service towards the advancement of Art, Literature and Science, and also public service of the highest order”. Later in 2011, the eligibility criteria was modified. Now, this highest civilian award of India is presented in recognition of “exceptional service or performance of the highest order in any field of human endeavour.” Both male and female, belonging to any race, occupation or position are eligible, provided they meet the first criteria. It can also be presented posthumously.

Recommendation: No formal recommendations are required for Bharat Ratna. The Prime Minister of India recommends the name(s) of the recipient(s) to the President of India.

Conferment: Bharat Ratna is Given by the President of India. On conferment of the award, the recipient receives a medallion and a certificate (Sanad) signed by the President.

Medal: The shape of the medal is similar to a leaf of peepal tree (sacred fig). It is 59 mm long, 48 mm wide and 3.2mm thick. On front side, there is an embossed replica of the Sun with rays spreading out from the centre. Below the Sun, the words ‘Bharat Ratna’ are written in Devnagiri script. On the backside, there is an embossed National Emblem of India and the National motto “Satyameva Jayate” is written in Devnagiri. The medal is made from toned bronze. The Emblem, the Sun and the rim is made of platinum. The inscriptions are in burnished bronze. The Bharat Ratna medal is made by the India Government Mint in Kolkata.

Ribbon: The medal comes with a white riband , which is about 38 mm wide. The Bharat ratna medal is worn round the neck.

Through there is no monetary grants, the recipients of Bharat ratna enjoys some special benefits from the government services. For example:

Following is the list of personalities who were conferred with Bharat Ratna: