Pradhan Mantri Ujjwala Yojana is a Government of India scheme for providing free Liquefied Petroleum Gas (LPG) connections to 5 crore (50 million) women from below poverty line (BPL) households. The goal is to empower women, protect their health and generate rural employment opportunities by replacing conventional fuels with cleaner LPG. The Ujjwala scheme was officially launched by Prime Minister Narendra Modi on May 1, 2016 at Ballia, Uttar Pradesh.

In India, the poor have limited access to LPG for cooking. That’s why many poor people in India still use conventional solid fuels such as woods, coal, charcoal, cow dung and crop wastes for cooking. Those fuels are usually burnt in open fires and simple stoves (chulahs), which results in emission of considerable amount of smoke and particle matters. This household pollution causes various illness. According to WHO, about 5 lakh people dies every year due to exposure to household pollution. Most of these premature deaths were linked to non-infectious diseases such as heart disease, stroke, lung cancer and chronic obstructive pulmonary disease (COPD).

Thus Govt of India has launched the Pradhan Mantri Ujjwala Yojana, under which free connections of LPG will be provided to women in BPL families. This LPG connection scheme would relief women from scourge of smoke and disease. It will also empower women, reduce drudgery and the time spent on cooking. Providing LPG connections to BPL households will ensure universal coverage of cooking gas in India. It will also provide employment for rural youth in the supply chain of cooking gas. 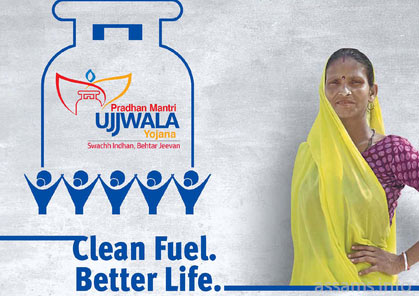 Free LPG connections to 5 (five) crore women from BPL families within three years. Through this initiative, Govt. aims to achieve the goal of universal coverage of cooking gas in India. It will not only provide cleaner fuel for cooking, but will also help protect the health of women in rural India. Government would bear the administrative cost of Rs. 1600 per connection, which includes a cylinder, pressure regulator, booklet, safety hose, etc. There is also provision of EMI for the cost of stove and cylinder refill cost.

The Pradhan Mantri Ujjwala Yojana is being implemented by the Ministry of Petroleum & Natural Gas. The identification of BPL families for this scheme will be done in consultation with the State Governments and the Union Territories. The central government has earmarked Rs. 8000 crore for this scheme. This Scheme would be implemented within next three years, starting from 2016-17.