The Indus Valley Civilization was one of the greatest cultures of the ancient world. It was spread over present day Pakistan, Afghanistan and Northwest India. Though earliest evidence dates back to about 7000 BC, this civilization reached it’s peak between 2500 to 1900 BC. During the peak or mature period, it covered an area of about 1.5 million square kilometres, which is roughly about 30% area of present day Indian subcontinent. 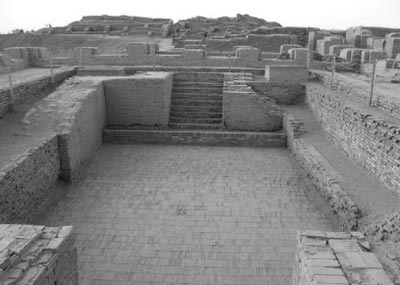 The earliest excavations in the Indus valley were done in 1920-21 at Harappa in the West Punjab and Mohenjodaro in Sind province of present day Pakistan. The excavations in Harappa was lead by D. R. Sahni, while R.D. Banerjee excavated at Mohenjodaro. The findings in these two cities brought to light a civilization, which later came to be known as ‘Indus Valley Civilization’ or ‘Harappan Civilization.

This civilization was called the ‘Indus Valley Civilization‘, because during earliest excavations remains were found only in the valley of the Indus River. Since, the remains of this civilization were first noticed at Harappa, it is also known as the ‘Harappan civilization‘. However, later excavations lead to discovery of more sites far away from the Indus valley. So, scholars also use the term ‘Indus Civilization‘ (without the word valley) to denote this ancient culture.

The findings of excavations in various sites reveal a gradual development of Indus valley civilization. Earliest evidence of the roots of the civilization is found in Mehrgarh, which dates back to 7000 BC. In Indian subcontinent, farming and related activities first started in Mehrgarh (Wright 2010). Gradually, primitive farming technology developed in Mehrgarh and contact with western settlements increased. By 4000 BC, many small and medium size sites developed all over the Indus valley.

In around 3200 BC, the first large city arose in the form of Harappa. Other cities such as Mohenjo Daro appeared between Mehrgarh and Harappa on the banks of Indus River in around 2500 BC. Gradually a uniform culture developed at settlements spread across nearly 1.5 million square kilometers, covering parts of present day Punjab, Uttar Pradesh, Gujarat, Baluchistan, Sindh and the Makran coast. The cities of this culture, which we refer to day as Indus valley civilization, were more advanced than their counterparts in prehistoric Egypt, Mesopotamia or anywhere else in Western Asia. The civilization continued to grow and flourish till 1900 BC. After 1900 B.C. the uniformity of the civilization started to weaken and regional variations started to appear. By 1300 BC, it completely disappeared.

Date of the Harappan Culture:

After discovery of Harappan civilization in 1920s, the dating was done on the basis of the findings of Harappan seals on Ur and Kish in Mesopotamia. In 1931, Sir John Marshall dated Mohenjodaro between 3250 – 2750 B.C. With discovery of new dating methods, the age of the Harappan culture was further modified. In 1956, based on radiocarbon dating, Fairservis estimated the age between 2000 – 1500 B.C. In 1964, D.P. Agarwal dated the culture between 2300 – 1750 B.C.

a) Pre-Harappan stage (7000 – 3500 BC): In this stage, nomadic people began to adopt agriculture. The excavations at Mehrgarh reveal the existence of pre-Harappan culture. Evidences of this stage are also present in sites like Kalibangan, Chanhudaro, Banwali and Kot Diji.

b) Early Harappan stage (3500 – 2600 BC): In this stage, people mostly lived in large villages in the plains and there was a gradual growth of towns. Thus, a gradual transition from rural to urban life happened in this stage. Sites of Amri and Kot Diji contains evidence of this stage.

c) Mature Harappan stage (2600 – 1900 BC): The Mature Harappan period lasted about 700 years. Changes took place in social organization, politics, language and religion. Great cities emerged in this stage. The excavations at Kalibangan with its elaborate town planning and urban features prove this phase of evolution.

d) Late-Harappan stage (1900 – 1300 BC): In this stage, decline of the culture started. Characteristic features of the civilization started to disappear. Most of the mounds were fully inhabited. Houses and workshops suggest over-crowding, which was  possibly due to refugees from Eastern regions where the rivers were starting to dry up. The excavations at Lothal reveal this stage of evolution.

So far, more than 1000 sites belonging to the different phases of this civilization have been discovered. Some of the important sites are Harappa in Punjab Pakistan; Mohenjo daro in Sindh, Pakistan; Kalibangan in Hanumangarh, Rajasthan; Lothal in Ahmedabad, Gujarat; Banwali in Fatehabad, Haryana; Dholavira, Khadirbet, Gujarat; Rakhigarhi, Hisar, Haryana; Ganweriwala, Punjab, Pakistan; Sutkagen Dor, Balochistan, Pakistan

Some of the key features of Indus valley civilization:

The decay or decline phase of Indus valley civilization was witnessed during the period of 1900 to 1300 BC. That phase is marked by loss of distinctive artefacts such as weights, seals and beads. Town-planning, drainage system, long-distance trade and crafts also disappeared. In other words, transition from urban to rural way of life took place. Archaeological evidences suggest that those changes took place gradually and slowly.

Why those changes occurred? Why such an advanced civilization started to decline or disappear? There’s no single opinion on the matter. Archaeologists offer many different theories to explain why the Indus Valley civilization or Harappan culture declined. Some of the popular theories include climate leading to lower agricultural output; natural calamities such as recurring flood, drought and earthquake; drying up or changes in course of rivers; invasion of Aryan people; excessive deforestation; increase in population etc. Recent studies proved that climate change definitely played a role.