The Income Declaration Scheme, 2016 is a voluntary disclosure scheme of Government of India. It provides an opportunity to those persons who have not paid full taxes in the past to come forward and voluntarily declare the undisclosed income. Incorporated in the Finance Act 2016, the Income Declaration Scheme received Presidential assent on May 14, 2016. It will remain in force for a period of four months from June 1, 2016 to September 30, 2016. 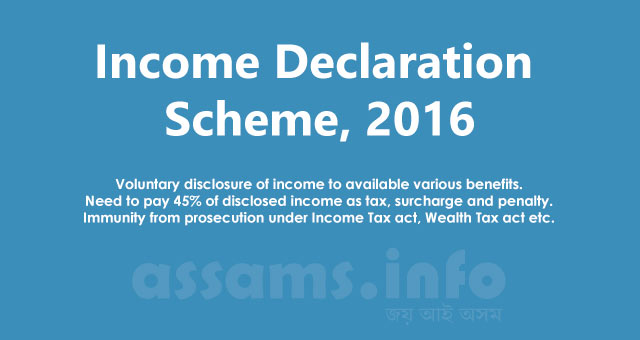 Under the scheme, a declaration may be made in respect of any undisclosed income for any assessment year up to 2015-16. For income in the form of investment in assets, the Fair Market Value of the asset as on June 1, 2016 will be the undisclosed income. But, assets located in foreign countries or income to which the Black Money Act 2015 applies are not eligible for declaration under the Income Declaration Scheme, 2016.