Homen Borgohain (Born 1932) is an eminent Assamese writer and journalist. He is one of the most influential novelists and writers of Assam. Borgohain was the president of the Asam Sahitya Sabha during 2001-02. 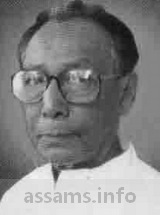 Homen Borgohain was born on December 7, 1932 at Dhakuakhana in Lakhimpur district of Assam. He studied at Cotton College, Guwahati. Borgohain is married to famous Assamese writer Nirupoma Borgohain. Borgohain was an Assam govt officer. But he resigned after an issue related to his work. He edited Saptahik Nilachal, Sutradhar, Asom Bani and North East Times. He is currently working as the Chief Editor of popular Assamese daily Amar Asom.

His first novel was Suwala (1962). The novel narrated the life of a simple village girl, who comes to a city in search of a better life but ends up in prostitution because of social and economical factors. His second novel Tantrik (1967) examined the values of mysticism. Borgohain’s essays are widely read in Assam.