Nirupama Borgohain (born 1932) is an eminent Assamese novelist. She was honoured with Sahity Akademi Award for her novel Abhijatri. 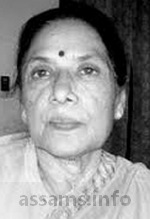 Nirupoma Borgohain (Nirupama Tamuli) was born in 1932 at Jur Pukhuri in Guwahati, Assam. She studied at Cotton College, Guwahati and Calcutta University, Kolkata. Borgohain was double Post Graduate in Assamese and English. She worked as English lecturer at various colleges in Assam. She edited Saptahik Sanchipat and Chitrangada.

Nirupama Borgohain is one of the most notable female novelists of Assam. Her first novel was Hei Nodi Niravadhi (1963). It was set on life of a female protagonist. Her novel Abhijatri (1995) was based on the life of Chandraprabha Saikiani. It won her the Sahitya Akademi Award in the year 1996.