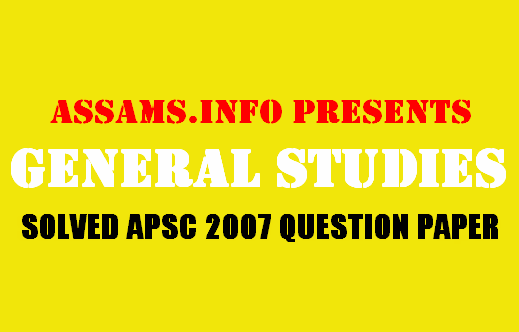 1. 1836 CE was crucial in case of Assamese language and literature because

a) Assamese was reinstated as official language of Assam

b) Bengali was introduced as official language of Assam

Answer: b. After Treaty of Yandaboo in 1826, British occupied Assam and imposed Bengali as official language in 1836.

2. Which of the following planets crossed the face of the Sun (in transit) after 122 years?

3. When was the first five year Plan started in India?

4. Which of the following is the basis for determining National Income?

a) Total revenue of the state

b) Production of good and services

c) Net profit earned and expenditure incurred by the state

d) None of the above

Answer: b. The sum total of all the goods and services produced in a country, within a particular period of time, is the basis of National Income.

5. Which state id the largest producer of Coal?

Answer: d. Chattishgarh has the largest coal reserve in India.

6. Name of the city which pays highest income tax

7. Give the full form of TQM


In order to view the complete page, you need to log in first
48. Which of the following is not a cause of inflation?

a) Rapid growth of costly imports

b) Slow growth in population

Answer: b (Slow growth in population)

49. The ex-officio Chairman of the planning commission of India is

a) the Governor of Reserve Bank

b) the Finance Minister

a) Indian council for cultural relations

b) International Centre for Criminal Rehabilitation

So, that was the Part I of 2007 APSC Prelims Question Paper. We hope that you found it useful. The rest of the questions will be made available in the Part II. In the mean time, you can check the Solved APSC 2009 Question Paper.

Did you liked the question paper? Have any questions or suggestion? Feel free to reach us via the comment form or our online contact system. If you liked the information on this page, don’t forget to spread the word. Share the info with your friends!

Disclaimer: This is for information purpose only. Though care has been taken during publishing, Assams.info will not be responsible for consequences or results that may arise due to wrong information or typing mistake.

This article belongs to Career section. It is about APSC, Assam, Civil Services Exam, Examination, Question Paper. For reference or bookmark, you can use this link.