Located in Assam state of India, Kaziranga National Park is a UNESCO World Heritage Site. It has the world’s largest population of One Horned Rhinoceros (Rhinoceros uncornis). It is also a natural habitat of many rare and endangered species including tiger (Panthera tigris), Indian elephant (Elephas maximus), capped langur (Trachypithecus pileatus), leopard (Panthera pardus), water buffalo (Bubalus arnee), swamp deer (Cervus duvaucelii), hog deer (Axis porcinus), and many species of birds and reptiles. At present, Kaziranga National Park of Assam is facing numerous problems. Some of them are discussed below. 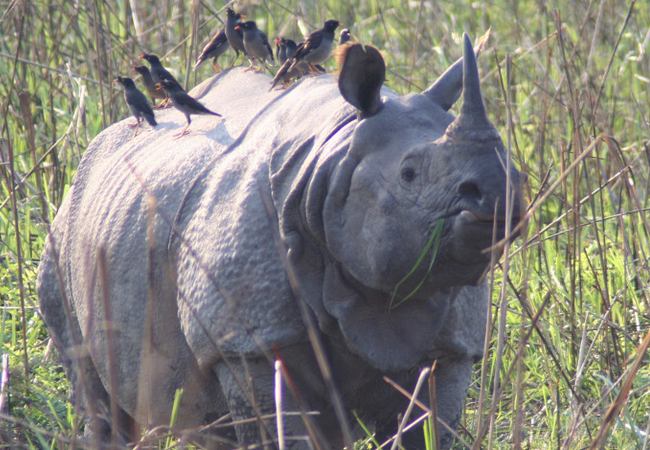 Following are some serious problems or challenges for Kaziranga National Park in Assam.

Poaching is a major problem in Kaziranga. The rare one horned Rhino population of Kaziranga is the main target of poachers. Due to increased demand and high price of rhino horn in illegal markets, incidents of rhino poaching has increased in recent year. The park managers and guards are at continuous battle with the poachers. They are authorised to shoot at sight. Still poaching continues, which is a matter of great concern.

Flood is an annual feature of Kaziranga. Though it helps in maintaining a balance in vegetation, there are many side effects of flood. Annual flood leave the entire park in a state of disarray and confusion. It results in various problems including death of wildlife, shortage of fodder, malnutrition, highway accidents, communication interruption, damage to infrastructure, accelerated erosion, siltation etc.

The main source of erosion in Kaziranga is the rivers that run through the park. The northern boundary of Kaziranga lies along the Brahmaputra river. This area is hit by flood every year. As a result bank erosion is sever in this area. Due to erosion, the area of this national park is shrinking.

Invasive species such as water hyacinth and Mimosa are great threats to Kaziranga. Water hyacinth clog water bodies and depletes oxygen in the water. It threatens underwater life and shrinks the size of water bodies. Exotic leguminous species Mimosa was introduced in Tea gardens of Assam. The species have a poisonous amino acid (Mimosin). So, they are harmful for herbivorous. Even fire can’t stop this weed from sprouting. Mimosa is spreading in grasslands of Kaziranga. Currently manual management methods (cutting/uprooting before flowering/maturity) are used, which requires considerable time and resources.

Due to flood and siltation, size of water bodies inside the park are shrinking. Siltation also affects the grazing areas of herbivorous animals. Annual flood alters the geography of the park and native animals losses their habitat. Invasive species of weeds such as water hyacinth and mimosa are also responsible for shrinking habitat.

Kaziranga lacks proper infrastructure and manpower for efficient monitoring, management and protection of wildlife. The rangers and frontline staff deployed in Kaziranga lacks modern weapons, advanced communication systems and efficient means of transportation. There is also lack of proper camps and watch towers. All these affects management and anti-poaching activities.

Due to it’s close proximity to human settlements, Kaziranga is facing various problems. Examples of problems that occur due to human interference: Illegal livestock grazing, illegal fishing, unplanned tourism infrastructure, highway traffic, tourism pressure, crop raiding, etc. Due to lack of goodwill of state government, encroachment of land continues in Kaziranga area. The major threat is from the illegal Bangladeshis settling near the park. In recent year, numerous dhabas and so called resorts were established in sensitive zones of Kaziranga. Such development activities not only disturbs wild animals but also increases the risk of poaching. Allowing stone quarries in such areas is a great mistake.

Kaziranga is an asset of Assam. It is a rare place on Earth. That’s why UNSECO recognised it by including in the list of World Heritage Sites. Every Assamese people must realize this fact. Govt. agencies and local organizations must work together in solving the problems of Kaziranga National Park. Public awareness must also be increased so that everyone can offer their helping hands towards protection of this asset of ours.

This article belongs to Assam section. For reference or bookmark, you can use this link.