Environment multiple choice questions (MCQs) set 3 from Assams.info. These 20 MCQs are based on environment related institutions, bodies, conventions, conferences, acts and programmes. So, you will find questions related to pollution, global warming, wildlife protection, biodiversity etc., but from the point of view of measures taken at national and international levels to protect, conserve and promote environment and biodiversity. Some of these objective type questions are from the papers of previous civil services examinations. So, if you are preparing for civil services exams like UPSC CSE or APSC CCE, you might find them useful. You will also find some unique MCQs that were created by assams.info team! 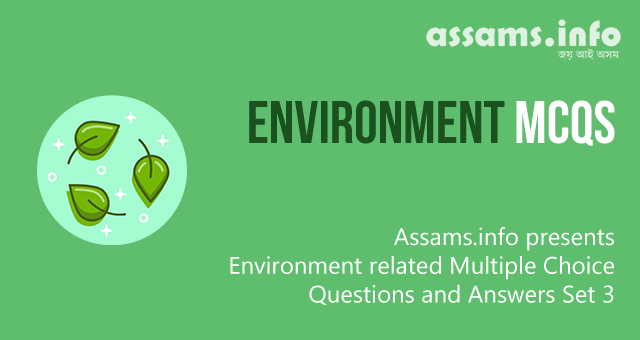 1. World Wildlife Fund (WWF) was founded in the year

3. Upon expiry of it’s first commitment period in 2012, Kyoto Protocol was extended till the year

4. The Living Planet Report is published by which of the following organizations?

5. Which of the following outlines the key aim of Basel convention?

6. Project Elephant was launched in India in the year

7. BioCarbon Fund Initiative for Sustain-able Forest Landscapes‘ is managed by the

8. The ‘Arabari Model’ of West Bengal is related to

9. Biological Diversity Act was passed in Indian parliament on

10. In India, Environmental clearances for mining projects remains valid up to a period of

11. The headquarters of Intergovernmental Panel on Climate Change (IPCC) are located in

12. Ramsar Convention on Wetlands was signed in the year

13. Stockholm Convention is related to

15. The concept of carbon credit originated from which one of the following?

16. The declaration of 16th Conference of Parties to the UN Framework Convention on Climate Change (UNFCCC) in December 2010 is known as

17. In Kyoto Protocol, the term “Annex I countries” denotes

18. Which one of the following is not a part of UNFCCC Umbrella Group?

19. National Action Plan on Climate Change was released in the year

20. In the Intended Nationally Determined Contributions (INDCs), India pledged to reduce 33-35% of carbon emission by the year

This section is private. Please login to continue!

This article belongs to Career section. It is about Biodiversity, Environment, General Studies, India, MCQ, Pollution, Question Paper. For reference or bookmark, you can use this link.