APSC Combined Competitive Examination 2015 (Preliminary) was held on January 3, 2016. Following are the answers of General Studies paper. Due to lack of time, we are providing only the answers. We hope our users and candidates who appeared in CCE 2015 will find this page useful. We tried our best to mark the correct answers. But there may be some mistakes. Please do point out if you find any. The General Studies paper is courtesy of Assams.info user Normada. Answers are provided by Bhaskar. 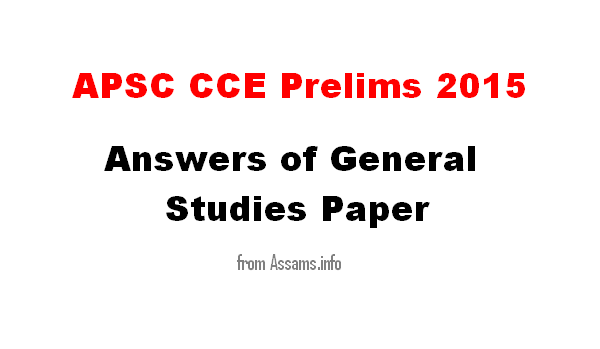 4. a) Kanchenjunga (This is controversial. We know that K2 is in India. But that is not accepted by everyone. Even govt of India states Kanchanjunga as tallest peak in India: http://pib.nic.in)

9. b) Leukoderma product Lukoskin was developed by DRDO (http://pib.nic.in/newsite/PrintRelease.aspx?relid=75790)

12. d) EDUSAT was launched in 2004 (http://www.isro.gov.in/category-spacecraft/edusat) Thanks Peter north.

22. d) Defence is not development expenditure.

45. b) North-East. Thanks Jhonny depp.
Question was: In a meeting, the map of a village was placed in such a manner that South-East becomes North, North-east becomes west and so on. What will South become? So, what you need to find is the current direction that is similar to South in the original map. What was originally South is now North-East. Please check the following pictorial explanation. 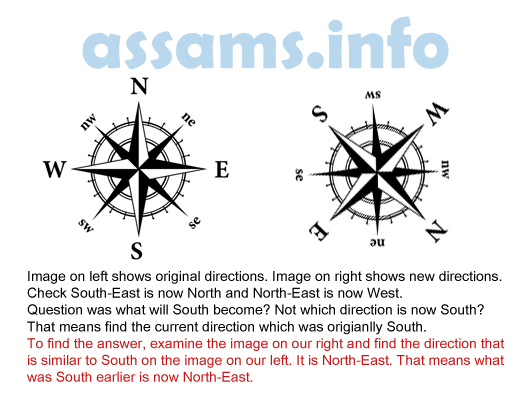 52. c) Supreme Court. According to Article 71, all doubts and disputes related to election of a President or Vice-President shall be inquired and decided by Supreme Court.

77. d) Sirocco
Questionable or doubtful! According to study materials of some Delhi coaching centres: Harmattan and Sirocco are both hot and dry winds. Sirocco covers North Africa, Italy, Sicily etc. Harmattan covers West Africa, Nigera, Ghana etc. And both carries dust. According to TMGH General Studies For Civil Services: Sirocco is a hot dust laden wind that blows eastwards from Sahara across the Mediterranean and raises the temp of the areas. Harmattan is a relatively cool dry wind blowing over Sahara in winter season. According to Pearsons General Studies Manual: Sirocco is a hot moist wind that blows from Sahara. Sometimes Sirocco carries Sahara dust. Harmattan is a cool, extremely dry wind that forms over Sahara. It is relatively cool because Sahara is cool during the dry season from December to Feb.

89. a) National Institution for Transforming India

98. a) and d) Baksa district was curved out of a part of Nalbari, Barpeta, Kamrup and portion of Darrang district.

The answer keys published by APSC contains error. For each question, compare the answer mentioned in different answer keys. We spotted some mistakes in GS paper and some optional papers.

If you want to report an error or mistake to APSC, don’t forget that last date is February 8, 2016.

This article belongs to Career section. It is about Answer Key, APSC, Assam, Examination, Question Paper. For reference or bookmark, you can use this link.