Here is the answer key of the Model Question Paper (General Studies) for the APSC Combined Competitive Exam (Prelims). The model paper prepared by Assams.info contains total 100 multiple choice questions (MCQs). In this page, you’ll find answers of those questions. We are also adding short description or explanation with most of the answers. We hope it will help interested candidates of Assam Civil Services examination. 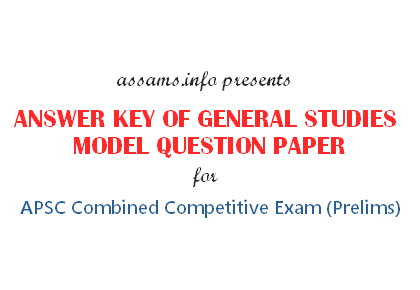 Q 1. a) Gulf of Kutch. In September, 2013, Ministry of Environment & Forests declared the Marine National Park in Gulf of Kutch as the India’s first Marine Eco-sensitive Zone.

Q 2. d) Except Bubonic plague, the other three diseases are known to cause Co-infection with HIV.

Q 3. c) Inner ear or labyrinth. Vestigial organ is an organ that has reduced functionality or no longer serve any purpose. Internal ear or labyrinth is essential for hearing and balance. Other options are vestigial.

Q 4. b) Ultraviolet light from sun broke down water molecules into hydrogen and oxygen.

Q 10. c) A digital currency. First conceptualized by Satoshi Nakamoto of Japan, Bitcoin is created, kept and used electronically. It is also called crypto currency, as cryptography is used for controlling the creation and transaction.

Q 19. c) As per a report submitted by former RBI Chief and Prime Minister’s Economic Advisory Council Chairman C Rangarajan, new poverty line for India is Rs. 32 per day in villages or Rs. 47 per day in cities.

Q 21. c) Rani-Ki Vav is a stepwell built in 11th century. It is located at Patan in Gujarat, on the banks of Saraswati river. In 2014, Rani-ki vav got approval of USESCO for the World Heritage list. Mountain Railways of India is already in the list, while other two options were in the tentative list.

Q 22. b) The 41st conference of Indian National Congress was held in Guwahati.

Q 26. d). The headquarters of Assam Gas Company is located in Dibrugarh of Assam.

Q 27. c) The other three option correctly presents the places (city or country) from North to South. But in option c, the correct sequence should be Boston – New York – Arizona

Q 28. b) Founded in 1792, Calcutta Cricket Club was the first Indian cricket club

Q 34. b) OPCW headquarters are located in Hague, Netherlands

Q 38. a) Published in 1908, Kuri Satikar Sabhyata was written by Benudhar Rajkhowa.

Q 39. b) Phillips Curve represents the relationship between unemployment and rate of Inflation. Rates of taxation and Government Revenue represented by Laffer Curve. Loren Curve

Q 40. a) The Emergency Provisions are in Part XVIII of Indian Constitution.

Q 45. a) Deciduous forests are found in Temperate Zone climate.

Q 46. c). Android is not a mobile phone and not all Android apps are free.

Q 47. a) Thang-ta of Manipur is a martial art where sword and spears are primary weapons.

Q 48. a) Joule is the SI unit of Energy, quantity of heat or work. Unit of power is Watt, Illuminance is Lux and of Pressure is Pascal.

Q 52. a) The Article 20 (2) mentions that “No person shall be prosecuted and punished for the same offence more than once.”

Q 54. d) FDI is not allowed in Coffee cultivation

Q 55. d) Except Labrador current, all other listed options are Warm currents.

Q 58. a) Norton is a security software, others are web browsers.

Q 60. b) Head office of Asam Sahitya Sabha is located in Jorhat, Assam.

Q. 61. a). There can be more than one scene in one act plays. Khol, not Dhol is used with Borgeet.

Q 62. a) Other flags can be placed below National flag. Horse is on left and bull on right. English title was “Morning Song of India”.

Q 66. b) INS Vikramaditya is a Kiev-class aircraft carrier, which Russia sold to India.

Q 67. b) Vidhan Parishad is formed by both elected and nominated members. It is a permanent house and retired members are eligible for re-election.

Q 68. b) Rice fields contribute majority of Methane. In terms of emission, it stands only next to livestock sources.

Q 72. b) Sanjaya Baru is the author of the book The Accidental Prime Minister

Q 76. a) Instituted by K. K. Birla foundation, Saraswati Samman is awarded for literary work in any Indian language listed in Constitution of India.

Q 77. c) All other points outline the decline of Demographic Dividend.

Q 78. c) It should be “which inspired our national struggle for freedom”, not Constitution.

Q 82. c) Abdul Rahim Khan was a poet. He was one of the nine jewels in Akbar’s court.

Q 84. a) Quo Warranto means “by what warrants”. It can be used to question appointment of a person in a public office.

Q 85. c) Phulguri Dhawa or Phulguri Uprising started in 1861. It was the first agrarian revolt in Assam.

Q 87. a) US President Roosevelt coined the term United Nations. He used it during the World War II, in the Declaration of United Nations of January 1, 1942.

Q 89. a) National Emergency Proclamation must be presented before Parliament within one month. Because such proclamation cease to operate at the expiration of one month unless approved before.

Q 92. b) The first ever PIL case was related to condition of prisoners in Bihar. 1979 case was formally known as Hussainara Khatoon & Ors vs Home Secretary, State Of Bihar.

Q 95. a) Jayanti Patnaik was the first Chairperson of NCW

Q 98. d) Guwahati Refinery was built with help of Romania.

Q 99. a) One third of total members of Zilla Parishad

This article belongs to Career section. It is about Answer Key, APSC, Civil Services Exam, General Studies, Question Paper. For reference or bookmark, you can use this link.