Indian History Multiple Choice Questions (MCQs) for competitive examinations. This MCQ set contains 20 objective type questions from Modern Indian History topics such as British Rule in India and the Indian Freedom movement. Some of these questions are picked from previous question papers. Just like our previous indian history mcqs, short explanations are provided along with the answers. We hope that student and civil service aspirants will find these questions useful. 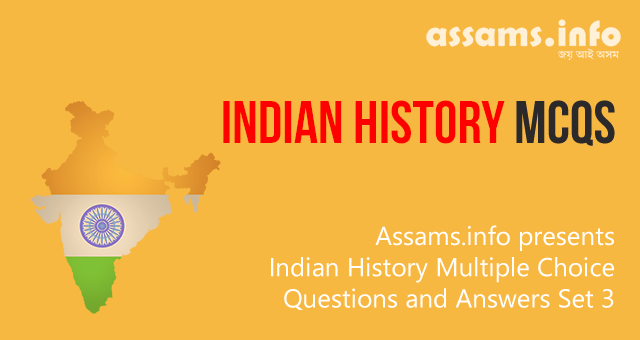 Indian History is one of the important parts of the general studies paper of any competitive examination. Following twenty questions are from Modern History of India.

1. Who among the following attended the first Session of the Round Table Conference in 1930?

2. Which of the following Princely states refused to join the Indian Union in 1947?

3. Who among the following moved the first resolution in the first session of Indian National Congress?

4. For organizing which Satyagraha was Vallabhbhai Patel conferred the title of Sardar?

Answer: d) Bardoli Satyagraha
Bardoli Satyagraha of 1928 was organised by Vallabhbhai Patel. Due to his organizational skills and ability to mobilize the people, the women of Bardoli gave him the ‘Sardar’ title.

5. During his stay in South Africa, Mahatma Gandhi published a newspaper named

6. Controversial Rowlatt Act was named after Rowlatt, who was a

Answer: (b) Judge
Rowlatt Act was named after British judge Sir Sidney Rowlatt. He was the president of the Rowlatt Committee that prepared the controversial act.

7. Which of the following declared infanticide completely illegal in India?

8. The Anglicist-Orientalist controversy during the British East India Company rule of India was related to

Answer: b) Education
The Anglicist-Orientalist controversy was related the education system in India. Anglicists emphasised on English education, while Orientalist supported vernacular education. The controversy ended in victory for the Anglicists when Lord Macaulay’s ‘Minute on Education’ was passed in 1835 and English became the medium of education in India. From Assams.info.

9. Who was the first Indian to become a member of the British House of Lords?

In 1919, Satyendra Prasanna Sinha became a member of House of Lords, the upper house of British parliament. Later his son Arun Kumar Sinha inherited his seat. Dadabhai Naoroji and Mancherjee Bhownagree were elected to the British house of commons, not house of lords.

This section is private. Please login to continue!
18. Aruna Asaf Ali was connected with the underground activities during which one of the following movements?

19. Who among the following organized a march on the Tanjore Coast to break the Salt Law in April, 1930?

Answer: a) Educational reforms
Sir Charles Wood’s Despatch of 1854 was a written document which contained recommendations to improve education in India. It is said to have laid the foundation of our present system of education.

This article belongs to Career section. It is about General Studies, History, India, MCQ. For reference or bookmark, you can use this link.