Assams.info brings you the General Studies Question Paper of APSC Combined Competitive (Main) Examination 2006. The Assam Civil Service Examination conducted by APSC is considered as one of the toughest Govt. recruitment examinations. The first stage (APSC Prelims) of the examination is objective type, while the second stage (APSC Mains) is subjective type (written). Following is the full APSC Mains 2006 (General Studies) question paper. 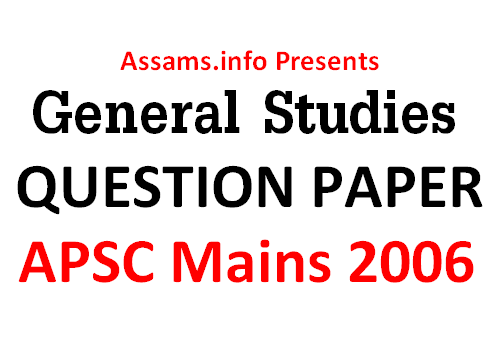 (a) What is recession? Could the US recession bog down Indian economy?
(b) What are the alternative fuels available for the transport sector? Discuss their characteristics, advantages and disadvantages in their utilization.
(c) Who is Dalai Lama? Why and when did he come to India?
(d) Half a century after the launch of the notorious morning sickness pill, thalidomide, its surviving victims are demanding compensation. Explain why compensation is to be given.
(e) What are the salient features of the Government of India Acts of 1858 and 1909?
(f) Discuss the significance of the deal in which Tata Motors bought Jaguar and Land Rover from automobile giant, Ford.
(g) What is the composition of the Rajya Sabha? How are the members elected?
(h) Describe how the two parties in the USA select their presidential candidates.
(i) Evaluate the contribution of revolutionary terrorism represented by Bhagat Singh to the cause of India’s Struggle of Independence.
(j) What was the character of social religious reforms in the 19th Century and how did they contribute to the national awakening in India?
(k) Why is Siachen important?
(l) Why is Nandigram in the news? Discuss the handling of Nandigram incidents by the Left Front Government of West Bengal.
(m) What is EDUSAT? What role can it play in spreading education?
(n) Who is Kashmir Singh? Why is he in the news?
(o) What are the salient features of the Indo-US Nuclear Deal? Why is there opposition to it?


In order to view the complete page, you need to log in first
(m) What do you understand by a ‘search engine’ in internet browsing?
(n) What is ‘Artificial Intelligence’?
(o) What do the ‘hackers’ do?
(p) What is forward currency market?
(q) What is disguised unemployment?
(r) What is the difference between Green-box subsidies?
(s) Is the High Court’s power to issue ‘writs’ wider than that of the Supreme Court of India?
(p) What are the constitutional limitations on the free movements of Indians throughout the country?

The above APSC Mains 2006 Questions Paper is published for the benefit of APSC Assam Civil Services Exam candidates. We hope that our users will find it useful. The spelling mistakes in the question paper are not ours! They appeared on the original question paper.

This article belongs to Career section. It is about APSC, Assam, Civil Services Exam, Examination, Govt Jobs, Question Paper. For reference or bookmark, you can use this link.